<< Back to Main News 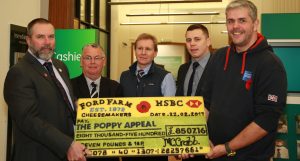 DORSET DAIRY Ford Farm has helped to raise over £8.5k for the Royal British Legion through sales of a poppy-shaped cheddar.
The cheque made out for the precise sum of £8507.16 was presented to the Somerset and Dorset representatives of the Royal British Legion at Lloyds Bank in Dorchester, today, February 22nd.
The Cheque was sculpted from cheese by Ford Farm’s creative consultant, Tanys Pullin.  The base was a White Cheddar as well as a Sage Derby – both made by hand by Ford Farm.  The graphics were made from wax, also supplied by the Farm.
The cheese cheque was used to transfer funds from Ford Farm’s bank account to the British Legion’s bank account by The Manager of Lloyds Bank in Dorchester.
Ford Farm came up with the idea to create cheddars in the shape of the British Legion Poppy earlier this year.  10,000 cheddars were distributed through Tesco stores nationwide as well as through The Fridge Delicatessen in Dorchester.  The cheddars contained 200g of Ford Farm’s award-winning West Country Farmhouse Cheddar.
The amount raised for the Royal British Legion is broken down as follows:-

FAST FACTS
– The Cheese Cheque was created by Tanys Pullin, Ford Farm’s creative consultant.  Tanys has also created a half tonne crown sculpture made from cheese, as well as a military Mark IV tank.
– The dimensions of the cheque are 780 x 390mm and it is mounted onto a 1mm frame.
– The cheese used to make the cheque is a combination of a white, mild cheddar and a Sage Derby.  Both cheeses are hand-made at Ford Farm.  The Sage Derby creates the green band running across the body of the cheque.
– The text is made from melted wax placed into both letter and number moulds.
– The cheque weighs around 15kg.
– It would have taken around 138.75 litres of milk to produce the cheese for the cheque (roughly the milk yield of five cows in one day)
– If you were to serve the cheese cheque at a party, it would feed 300 people (based on portions of around 50g of cheese per person)

‘How I made the cheese cheque – Tanys Pullin, Creative Consultant, Ford Farm Cheesemakers
‘First of all one of the engineers at Ford Farm had to make the frame to accommodate the cheese cheque.  The cheese was then grated and pressed into the frame, according to a visual I created.  White Cheddar made the border, Sage Derby the middle green coloured section.  Both cheeses used for the cheque are hand made by Ford Farm.
The cheese was then pressed firmly into the frame and chilled.  I then ironed it to create a smooth, flat surface.  I then cut out all the logos, letter, numbers, etc in paper to see how they would fit on the cheque and carved them into the cheese once I was happy with the layout.  I then melted wax, supplied by Ford farm to create all the text elements of the cheque, which I then pressed into the carved out spaces.
The whole job took me about five days to complete!’
The cheque will be kept in the freezer at Ford Farm indefinitely and rolled out for various events, coming up during the year to showcase  the possibilities of working with cheese.